I recently made a visit to Australia. It wasn’t a vacation. I was a supporting member of a somber, personal pilgrimage to honor the life of a family member. The most important day was the day we travelled the Great Ocean Road, which held special significance in many ways. Here are a few places we visited and contemplated that day.

The Twelve Apostles are a set of limestone stacks the rough waves of the Southern Ocean erode at approximately 1 inch/year. Once actually collapsed in 2005. As these stacks erode, new ones will form from the outcroppings of the main land mass starting as small islands, developing caves, then eroding into arches which will eventually collapse to become stacks like these once again. Birth, life, death, regeneration. 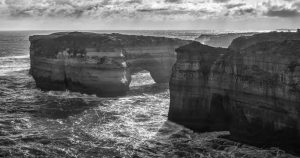 Muttonbird Island (which contains an arch) was the site of a catastrophic shipwreck in 1878. The clipper ship Loch Ard ran aground here. Out of 54 aboard, only two survived. 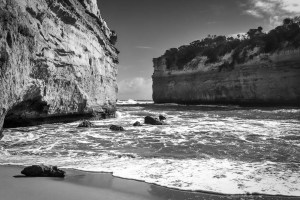 On the other side of Muttonbird Island is Loch Ard Gorge, where the only two survivors of the wreck washed. One, a 15 year old ship-hand, washed ashore. Upon hearing the cries of the other surviving passenger, a 17 year old girl, he returned to the churning water to rescue her. He then climbed up the sheer cliff to summon help. Hearing the old story made me want to hear the two went on to fall in love and marry, but the truth was they didn’t stay in contact with each other. This gorge is beautiful, the sand beach serene, but the power in the churning waves, the rocks, and sheer cliff faces seem to whisper, “Just try me…”.

We spent that day remembering, telling stories, and sharing respect for these places and the person who loved them so much. It was a good day.